Today is the day that we have opened our little blog to everyone we know.

So grab a cuppa, rip open those hobnobs, sit back, and enjoy our journey from couch to Half Marathon! 🙂

Don’t forget, this is all in aid of Help for Heroes. So check out the informational page and our bio for more details.

[the funniest, and most tragic runners you will ever come across]

I have always been a sucker for motivational running playlists.

I know, I know… it is pretty sad [adding to my repertoire of running tragedy]. But when your calves are aching, and you’re panting like you’ve induced an asthma attack, the voice of some stranger telling you ‘You Can Do it!’ in 20 metaphorical anecdotes… well it works. For me anyway.

When that gruelling half point comes Mr. Eric Thomas is always there booming away in my ear. HOWEVER. This week, after amassing 20 miles of running to my name, motivation has stopped working its effective shot of adrenaline… this week has been brutal. I have gained numerous bruised toes, and well… a blister that would rival the size of an apple [don’t worry, I won’t go into too much detail as the liquid that followed was enough to make me gag].

As Eric Thomas chants into my ear…

Pain is temporary… Eventually, it will subside. And something else takes its place.

If I quit, however, it will last forever. – Eric Thomas.

Temporary… eventually … All great words Mr. Thomas, but this week temporary was starting to run into an eternity. And not an eternity of joy either! 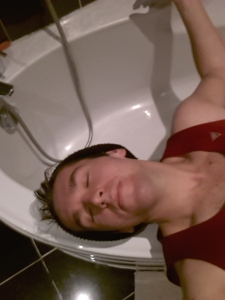 How I ended most runs this week… collapsed in the bath!

As I ended every run, my body despising my life choices, I could only make the slow crawl to the bath and submerge myself in pity.

Yet here I am now, blister healed and looking semi-normal, #chafing away at my desk. Cuppa Tea in hand, running shoes strategically placed next to the door. I am off for my next run! [I thought now would be a good time as the home roast dinner sizzles and melts away in excitement … well to be honest it’s my stomach and appetite that’s excited!]

So pain is apparently temporary. Although good ol’ Thomas does make it seem like an easy adventure, running in the build up to the Half marathon is anything but! But like most of my posts, the opening melodramatic whining has ended up an optimistic valuation of things [I’m just a cynical git really… you’ll get used to it… or stop reading – please be the former].

As much pain as running does bring, I can’t seem to stop. So the 28 day deadline does have some reason for that, but I like to think I’m on my way to becoming at least a dedicated runner. Successful… probably not. Intermediary??

What can I say, when you’re running with views as good as mine, I can handle a little temporary pain. Because eventually you come to realise it isn’t so bad…

[give it a week until the 5th blister and gollum-esque feet and I’ll change my mind].

Have a good weekend!!

P.S. Don’t forget to check out the Help for Heroes page to see why Fran and I are running!! Oh, and a cheeky donation would be lavvvvvly. Cheers folks!

The Cardiff Half-MarathonOctober 6th, 2013
The big day is here!! Hopefully we have raised enough money to hit our target! Thank you for #ChafingTheDream with us, we love you all for your support and donations. Time to get our blisters on!! AF x

What are we Tweeting?